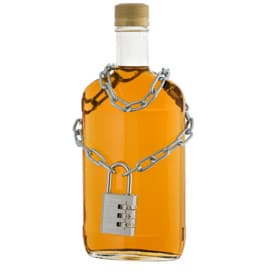 Make no mistake: after a bariatric procedure like gastric bypass surgery, drinking alcohol is a poor decision. Full of empty calories capable of derailing your weight loss diet, gastric bypass patients who imbibe may also experience the discomfort of dumping syndrome, in which food empties into the small intestine too quickly and causes vomiting or diarrhea. Booze will also put increased strain on your liver, which is already hard at work as you rapidly lose weight following surgery.

Published in the Journal of the American Medical Association, the study was conducted by researchers at the University of Pittsburgh. Two thousand bariatric patients at various centers around the U.S. were asked questions about their drinking habits prior to surgery and again one and two years after treatment. Then, researchers measured their responses on a scale created by the World Health Organization to chart alcohol abuse disorders. Researchers found that 7.6 percent of the respondents had drinking problems before surgery, but that number increased to 9.6 percent by two years after the procedure.

They believe that this may have something to do with increased sensitivity to alcohol following gastric bypass surgery. Because of the significant reduction in stomach size following the procedure, gastric bypass patients absorb alcohol about four times faster than the typical person, making alcohol consumption particularly fast-acting and dangerous. Though most gastric bypass patients aren’t explicitly forbidden to drink alcohol, it’s a habit that is highly frowned upon by most bariatric surgeons, with most suggesting that their patients either discontinue or severely limit their consumption both before and after surgery.

Drinking after gastric bypass ultimately defeats the purpose. By flooding your system with extra calories and risking dumping syndrome, those who drink are ultimately negating the healthier lifestyle and slimmer waistline that weight loss surgery can help you achieve. It typically is not recommended to drink alcohol within six months after receiving gastric bypass, but those who return to their former drinking habits later are not doing themselves any favors. Instead of returning to old habits, or even having a drink on rare occasions, use your focus on new habits and better health after weight loss surgery as a reason to quit alcohol altogether.

If you’re considering gastric bypass, don’t let this study deter you from the procedure. Though the findings are concerning, gastric bypass is an extremely effective way to deal with the even more concerning issues posed by obesity. The vast majority of gastric bypass patients will not develop issues with alcohol addiction. However, if you do find yourself abusing alcohol after receiving any kind of weight loss surgery, contact Dr. Taylor immediately to discuss the appropriate course of action.